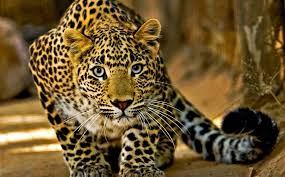 I came across it yesterday.  A documentary from BBC on Leopards and that was mostly because I was looking up information to keep this animal totem nourished within me.  I realized I’d seen that documentary before–years ago.

The attraction to Leopards has always been there but faint or it’s been present in faded awareness. This animal has returned to me–the spirit of the Leopard as it relates to strength, wisdom, intuition and most of all shamanism has been reawakened.

I’m noticing leopards everywhere now–in purchases I’ve made over the past months that have leopard patterns; scarves, glasses, clothing, etc.  But not until Leopard came to me in a dream and in meditative visions did I connect all the dots.  Pardon the pun, but it’s true!  The Leopard part of my psyche is being re-triggered and this power animal is returning to me.

I really have to smile at how in such an absent minded way, I always select the leopard patterned wrist wrap for my workouts at the gym.   (I use a soft cloth to put on my wrist to catch perspiration when working out at the gym.)  How long has this spirit animal been trying to call for my attention?

How could I have not realized all the leopard patterned items I have representing my connection to this power animal totem?  It’s actually kind of embarrassing to admit.

I’ve heard it said to watch for the behavior of other animals around you as another way your power animal communicates.  It may sound silly but as was walking to my apartment the other night after dark, a gold colored cat came rushing though the parking lot as if it did not even see me.  He trotted by me as if I were a ghost calling out some strange sound over and over eventually disappearing into the night.

Yesterday, he was at my door and scattered off when I opened it.  I did not know he was there at the side of my door when I opened it.  He took off but came to rest at the front of my car, looking up at me as I walked closer taking his photo as I went.  He looked up at me and as we made friends.  Was he connecting to my Leopard energy having called out to me in his ghost walk the night before?  Who can say so for sure.

I’ve seen stray cats out and about here but not one of this color until yesterday.  Here are the photo’s.  At first he kept a distance and then felt very comfortable.

I shared my leopard energy with him as well as some food and drink, hoping it will help him on his path.  Stray cats have to be strong and wise and wary in a world that misunderstands them.  And they (like me) have a good deal in common with Leopard energy.

PS — this stray cat has a large type of rosette (see image below, close up) on his side.   I call him SHAMAN. 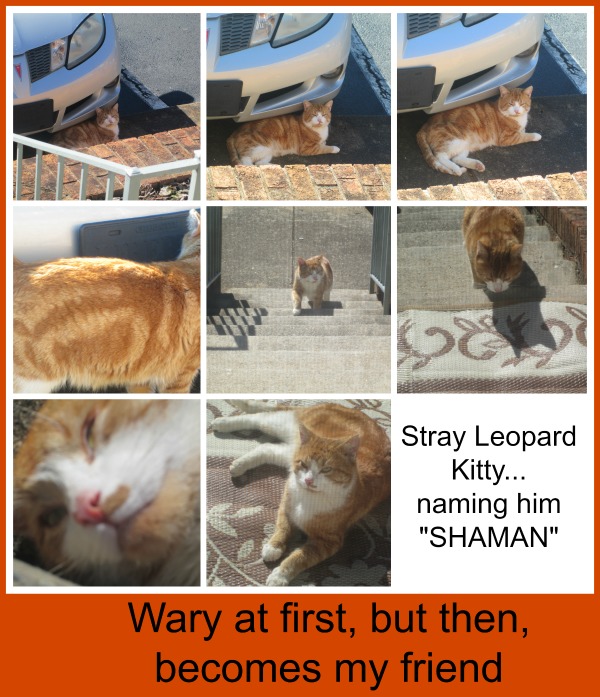