On June 5 or 6, depending on where on the planet you live, Venus will cross the face of the Sun.  As it merges with the Sun, all that Venus represents (values, desires, personal needs, love, etc) will be transformed by the Sun or will transform the Sun itself!  What does our Sun represent to our psyche astrologically? Some say it’s our essence; others say its our ego/personality; some say Sun represents father energy or male energy (while the Moon represents female energy–in that way) and others say the Sun represents our life purpose.  In all models, all planets revolve around that Sun and a healthy Sun in our psyche is what helps us feel whole, complete and happy.  No matter which way we see the Sun astrologically, there’s about to be some transformation through the Venus occulation that is occurring this week!

This planetary alignment of Venus crossing over the face of the Sun is called an occultation [see image]–some simply call it the ‘transit of Venus’.

Venus visibly seen in front of the Sun is a symbol for the rise of feminine energy in a current patriarchal world; so male/female issues and patriarchal values versus spiritual could be brought forward.

To emphasize this even further, during the occultation, Venus/Sun will be forming a square to Mars. Squares are what are called ‘hard’ and ‘challenging’ aspects, and Mars is the male counterpart to Venus.

To add to the intensity, this occurs within a day of a Lunar Eclipse, which will affect us emotionally.

This “occultation” of Venus over the Sun is similar to an eclipse, but Venus will not totally block our view, rather, she will appear like a dot crossing over the face of the sun. [see image above]

“Although Venus and Sun meet up every couple of years, we have only witnessed this event six times in recent human history. The next transit on June 5, 6 will be our seventh observance.” –Rose Marcus

PS — Venus is in Gemini retrograde, so there will be dialogue about these topics this week, even if some of it may be internal!  Roles of male versus female needs in relationships; my values versus your values; patriarchical values versus matriarchal/spiritual values; consensus level consciousness and values versus spiritual level; new world values may very well be implanted, seeded, boosted or reawakened  the consciousness of the human at this time.  How will it affect your personal life?  Stay tuned, it should be an interesting week ahead!

Think Before You Shoot (or if you must, for you own health, think after… read on and you will see what I mean; it can’t hurt to know these things 🙂

This post was motivated by love for both human and animal kingdoms.

One With The Earth; are you awake or asleep?  A myth is a legend and as many historians will tell you, the power of the myth (See: Joseph Campbell) is…. well, powerful and it holds a truth that is deeply engrained in consciousness.  That is, if one is conscious enough of consciousness to ‘be’ conscious of it.  Either you get that or you don’t.  Let’s move on…

Do you find hunting, the hunter—sport hunting with no reverence for the animal—emotionally upsetting? Are you a hunter who is looking forward to the upcoming hunting season and one who has never considered the spirit of the animal and its connection to your christian god?   Do you believe nature and its inhabitants are on the earth for the sport of serving your destructive pleasure?  On the other hand, you might carry the memories in your soul of the early days when man was merged with nature as one.

Perhaps, like me, you dread the start of the upcoming hunting season.  May you find some comfort or balance with your emotions with that by reading this post.

Whether you have an aversion/abhorrence to hunting OR an attraction to killing animals (either way), my intention in writing about this whole issue of hunting and killing animals is that it be of service to the reader.

If you’re a hunter with no conscious awareness of your spiritual connection to your animal brothers and sisters, maybe you could develop a-little-bit-of one by reading the story of the Little Deer below.  You may want to think about what you are doing when you shoot to kill in the Appalachian Mountains of North Carolina–you are on sacred ground, the Cherokee Ancestral Home where animals were considered ‘relatives’ and their clans respected.

This information comes from some writing by Warren Jefferson who compiled such information on beliefs of the North American Indian.

The lives of the  North American Indians were infused with the supernatural and there was a constant interaction between the spirit world and theirs.

In my recent study which comes from a renewed interest in Indian culture I came across a Cherokee myth or story referred to as Little Deer.  I am most interested in the ancient ancestors, before Europeans came to North America.

Many Indian tribes throughout North America tell of a time when humans and animals ‘shared common ancestors’ and ‘spoke the same language’ with animals.  (See Ted Andrews, Animal Speak)   We see groups with semi-animal and semi-human ancestors in American Indian culture–half-man and half-animal.   But then don’t we see the same thing in the ancient cultures of Egypt and Greece for example?

Pre-patriarchial times is what I mean… the matriarchal days when earth mother was honored have an influence on the consciousness carried forward into some Cherokee myths.

There were animal totems and certain animals were seen as protectors of the animal clan.  The person would, in those days, enter into the relationship with the spirit of a particular animal species such as the wolf, bear, caribou, elk, deer or other animal and incorporate the animal’s characteristics into one’s self drawing the animal’s qualities, strengths and survival skills.

Perhaps there are many of us who have the memories of living in such ways still alive in our souls?  And we are the ones who would likely shutter at the thought of sport killing and hunting.

Once a totem animal, in Indian tradition, has been acquired, the person is bound to certain actions and taboos regarding that animal.

Christian or non-spiritual hunters today seem to have no taboos other than their enjoyment of the kill as a sport without any consideration for the soul of the animal.

And, Yes.  North American Indians believed not only animals but trees had a soul too.  Living closely with nature thousands of years ago  it was as obvious to them, just as it would be to today to anyone who lives close to nature and who has thrown off patriarchal religious conditioning which poisons the mind to the sacredness of nature.

Often a person could not hunt or kill his totem animal even as a matter of survival and even if the spirit of the animal was honored.  This is because someone’s totem animal is, for them,  in effect a special “relative”.

The Cherokee ancestral home is in the present-day western Appalachian Mountain region of North Carolina.  Today, many (or most) Cherokee people live in Oklahoma, since their forced removal from the region in 1838 known as the Trail of Tears.  I live in the Cherokee Ancestral territory.

I believe the following information comes from James Mooney’s “Myths of the Cherokee” about North American Indians.

This pardon by the hunter is made easier, according to the shamans, through their knowledge of reincarnation in which it is understood that every animal has a definite “life term”, which cannot be curtailed by violent means.

If the last paragraph above is true, it will help me get through this year’s deer hunting season—the beginning of which is closely approaching.  I find it highly significant that I seem to have drawn in the information exactly at a time when it is most beneficial to know!

According to the shaman, if the animal is killed before the ‘expiration date of the allotted time for that animal’s life’, the death is only temporary and the body is immediately resurrected in its proper shape from the blood drops, and the animal continues its existence until the end of the predestined period, when the body is finally dissolved and the liberated spirit goes to join its kindred.

This belief appears in the story of Little Deer (below).  In that story, certain supernatural personages have dominion over the animals and are therefore regarded as the… well, for the lack of a better word, perhaps the one who disseminates karma.

Here is the short story of the Little Deer from Cherokee Myth (and there are truths in myths!) about a hunter who neglects to do a ceremony for the animal’s spirit after killing a deer.  The following story comes from beliefs of North American Indians regarding their animal “relatives” who they call the “four-footed tribes”. 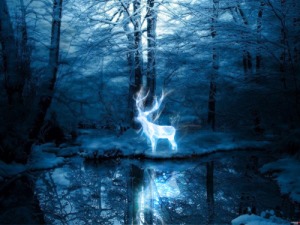 Now, whenever the hunter shoots a Deer, the Little Deer, who is swift as the wind and cannot be wounded [the Soul of the animal group leader for the deer], runs quickly up to the spot and, bending over the bloodstains, asks the spirit of the Deer if it has heard the prayer of the hunter for pardon.

If the reply is yes, all is well, and the Little Deer goes on his way; but if the reply be no, he follows on the trail of the hunter, guided by the drop of blood on the ground, until he arrives at his cabin in the settlement [the hunter’s living quarters], when the Little Deer enters invisibly and strikes the hunter with rheumatism, so that he becomes at once a helpless cripple.

No hunter who has regard for his health ever fails to ask pardon from the Deer for killing it, although some hunters who have not learned the prayer for the animal’s spirit may try to turn aside the Little Deer from his pursuit by building a fire behind them on the trail.  (Moony 1900)

Here is another version of the mythical tale of The Little Deer:

In these early days, the plants, the animals, and the people all lived together as friends. As the people multiplied, however, the animals had less room to roam, and they were either slaughtered for food or trampled under the humans’ feet. Finally the animals held a council to discuss what to do.  The deer held a council and decided to send rheumatism to any hunter who killed a deer without asking its pardon for having done so.

When a deer is shot by a hunter, the fleet and silent Little Deer, leader of the deer, runs to the blood-stained spot to ask the spirit of the killed deer if the hunter prayed for pardon for his affront. If the answer is no, Little Deer follows the trail of blood and inflicts the hunter with rheumatism so that he is crippled.

The more you are motivated by L.O.V.E., the more fearless and free your action will be