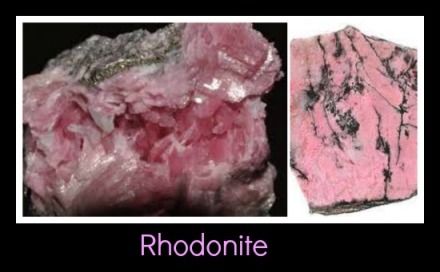 Rhodonite, sort of like Garnet–I love stones!  (crystals)  My mother did too.  She’d often pull along side the road to pick up a stone to examine the treasure closely.  My brother and I got used to the feeling of the car jerking over to the shoulder of the road—bump, bump, bump.  She’s going to get (yet) another stone@!  Part of my childhood that drew my attention to them in the first place. She was as excited (or more) than the rest of the world about the Moon Rock that the astronauts brought back with them, eventually making the trip to see it at the Smithsonian.  Actually touching a real Moon Rock–huge!  Anyway, thanks mom for reminding me of my connection with rocks and crystals at such an early age–she was a rock hound for sure!

Like many others, Rhodolite is thought to help with intuition and aiding with meditation and channeling.  I’m revisiting the crystal kingdom and realizing that many of my personal collection of crystals aid with the psychic work that I do–tools of the trade.  I was drawn to the crystal to purchase — or did the crystal select me like the wand chooses the witch or wizard.  Moot point really.  Anyway, my crystal book says that rhodonite is known as “the stone of inspiration”.  Every psychic should own one!

PS–don’t mistake rhodonite for rose quartz because of the pink color (some people do); rhodonite usually has gray with it.

Botswana Agate!  I drew a stone today as part of a divination exercise for my life.

This particular stone is known for its ability to energize the auric bodies and helps the body rid itself of toxins.

It is said to be able to counteract poison no matter if those happen on the physical, emotional or intellectual level.

I find this divination right on–in view of my recent (and still a bit current) physical symptoms of headache, body ache and nausea.  Some sort of toxin sounds pretty plausible to me.

Living alone in the mountains for 15 years not exposed to humans or places living in or around many humans habitats, it’s not all that far fetched that my immune and nervous system is still trying to adjust to living in so-called civilization now.

Anyway, the Botswana Agate… this stone also has qualities of energy which aid a person to concentrate and focus; that’s good because for my next trick I’m going back to work on the new, soon to be website.  I like the waves in this stone; makes me think of swimming!  The water!  I do miss the water right now.  We swam before we talked and before we walked and breathed but we forgot!

Anyway, all agate stones (and there are many varieties) are believed to generally balance the emotional, physical and intellectual bodies.  I think of all agates as good stones to have around when one is doing any kind of writing.

Anyway, this stone helps one when paying attention to details is a must!  Oh and it’s usually purple and gray.  By the way, psychics do readings for themselves all the time and this has just been one for myself.  I asked why I’m dealing with these certain physical symptoms right now (headache, nausea).  I’m going to put this stone in my little pouch and wear it around my neck for the rest of the day.  No more eating out for a while, and I’m going to wash off my veggies and fruits better–just in case.  For now, going to get more water–whatever the toxin is, I’m trying to drown it! LOL

Ah yes!  The little darling did it again!  “Aunt Joy, I didn’t think you had any friends.”  Well, of course, can you blame her?  I mention one of my friends at dinner in the restaurant–I was referring to a human friend by the way. Anyway…

She’s 17 years old and friends at her age are the end-all, beat-all and collecting the numbers at any price for popularity and all that is typical of that age I suppose.  Yet, myself at 17, I had my books and spent a lot of time to myself and as we trace this timeline backward and forward from that age, same deal!

I often talk about the trees being “my friends” and the birds too and then of course, my crystal friends–the stones I’ve been Facebook-ing about and in wrote about in my newsletter earlier this week.  My  niece joins most of the rest of consensus humanity (the mass-mind of a shallow society) with values completely different from my own and dare I say nearly opposed from  fringe dwellers (at least in consciousness) like me.

Well, she stopped my mind in it’s tracks at that moment with her comment about never seeing me with a “friend”.  I realize that most others who have the same world and “other-world” view as myself are like hidden gems and most I’ve found (or they have found me) through the Internet, my website, as clients or psychic class members.  I suspect there have been many lifetimes that my soul spent up on mountaintops or alone in the wood where I feel most at home with nature and animal friends.

So this innocent, thoughtless (or was it?) comment from this high school-er relative got me to thinking.  How does someone respond to that kind of thing?  I was stopped in my mental tracks by her words because I realized the pattern of people simply not knowing who I am–not that I’d expect any selfish minded, self-centered teenager to take the time or trouble to figure that out but how could I even explain it during casual dinner conversation?

So, I didn’t say much and tried to joke it away later in the conversation:  “Well, what do I know?  I don’t even have any friends. ha ha”

I have to say that when an animal says hello or recognizes me, it brings me feelings of happiness and sacredness (really sacredness is a really good word to describe it)—feelings that rarely happen when a human says hello when passing by.  I’m thinking of dogs who stop to say hello–this used to happen more often in the mountains where they weren’t leashed.  But even now here in the heart of the crowded human city when a pet owner walks by with their dog on the leash, we connect.  The pet owner fades back and blurs out in my experience and the dog and I connect!  Instant friend!

Each of my 3 daughters has a cat–one daughter has 3 cats and those are my friends too!

Those are the local friends within the community; but I do have online friends… many for years and years!  And telephone friends too.   Not that I need to defend or explain this—yet there it was again in the face of her comment.  Totally misunderstood—again!    Its a pattern of course and that feeling of being “an alien from a galaxy far, far away” (to borrow a phrase from the movies—wasn’t it Star Wars?) —anyway, that feeling is so familiar and has some emotional pain woven into it at points.   But then, it’s right on time–isn’t it?

I mean that astrologically it is–this whole friend ‘thing’ and relationship ‘thing’–now that the transiting Lunar Nodes are moving through Libra/Aries.  I’m sure there will be more of this kind of thing rather than less and I’m telling myself that I may as well get used to it.  As you  likely know, the archetype themes of Libra/Aries have to do with independence/freedom versus relationship.  And suddenly I hear Barbara Streisand’s voice in my head singing “People who need people, are the luckiest people in the world….”.  Honestly, frankly, truth be told—I’ve always hated that song!  I guess that could be pretty revealing, right?

Well, so today thinking of all this, I thought to close eyes and to do a CRYSTAL READING for myself, pulling a stone out of the bowl–the vibe of which I was hoping would give me some help.  After all, the title of this week’s newsletter was CRYSTALS HELP.  Anyway, guess what stone it was?  LEOPARDSKIN JASPER!

This is the stone that I think of as relating to communicating with the animals.  This stone relates to kindness and gentleness which is how I experience most all animals–they are kind and gentle and help us to be as well.  But mostly, since I was thinking today about how animals really make better friends than most humans (those ego-inflated humans with their agendas which rarely include unconditional love and acceptance)… mostly, I felt that with eyes closed drawing this stone out of my crystal bowl was a smile and recognition from the animal kingdom and my own animal totem.

For the record and in the interest of disclosure, being human myself (sometimes regretfully–ha ha) the unconditional love and acceptance example of animals is one that I could emulate more too.  I do like the example of cats however as they will intuitively walk away from humans with vibrations that are harsh, mean, aggressive, ill-disposed or  unfriendly.  Cats are selective about their human bonds–me too!

Funny thing though–if I should at any time find myself longing for anything or looking at my desire-nature, never is there wish for more friends.   I suppose it’s an emotional security thing, you know?  Most humans long for what they believe will give them emotional security, more happiness, and less pain.  I have a short list in that regard and more friends simply isn’t on it–and there’s no elitism or snobbishness with that or anywhere on the side.

I think, too, that as a psychic and medium, there is a continual awareness of having a full life with my friends in spirit world.  For example, right now, I feel the room in which I’m typing this filled with spirit beings, crystal people and …. well, the room is full, and in that sense my life is full and would a simple minded teenager understand that?

Spirit friends:  I can see them, feel, them and know I am surrounded by them–just like many other fringe dwellers who would be stumped, as I was, by that comment.

So, I will take my Leopardskin Jasper and place it in my pocket and carry it with me today and smile my secret smile knowing I’ve had a wink and a nod from those of the Animal Kingdom–the very best kinds of friends!

Excuse me now–because its time to water my plant friends!