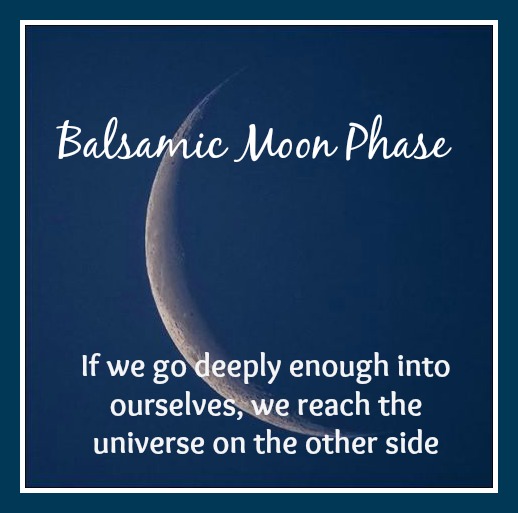 Balsamic Phase!  [AKA Waning Crescent Phase] Yep. Moon is at 2° Libra (today as I type this) and that feeling of wanting to escape into a mist of a cloud and fade out is here again–it’s a regular monthly feeling for me.  Maybe you too?  The Balsamic Moon says things like  ‘I want change NOW or GET ME OUT OF THIS REALITY’…. that’s the feeling I’m describing that you may be able to identify with regarding this Moon Phase.

THE SOUL AND THE DIVINE ARE ULTIMATELY INSEPARABLE AND INDISTINGUISHABLE — we can know that… have that experience in this phase!

The desire for peace and silence is overwhelming.  I currently reside (I changed the word live to reside just now)  in a parking lot type townhouse setting where every 8 feet on both sides of the narrow drive-through is a parking space.  Any time someone slams their car door, it sounds like a sonic boom going off around my head.  Most days it barely registers but the need for silence contrasts with the booms and bangs.  (No, I don’t have a headache but I feel the sounds in my body.  Has that ever happen to you?  You know the feeling, right?)

I have two roommates who bang around and dialogue early in the morning which I incorporate into weird dreams usually but it seems much more disturbing now.  This is typical of the Balsamic Phase of the Moon—the need for quiet, silence as the psyche on all levels needs to commune with the inner energy and distractions from the outer world loom much larger.  As I mentioned at other times in this blog, my natal Moon is balsamic (directly behind) my Sun and so this is true for me at all times, but at this time it is even more pronounced.

Coping with the outer world takes huge effort and concentration and discipline because all parts of mind/body/spirit want to go far away from the normal routine.  I spoke with one of my daughters last evening who expressed feeling overwhelmed with the demands of earth living–the long drive to work, the financial stresses and strains and the having to work long hours without what she feels is proper reimbursement for her efforts.  That’s another way to describe this phase.   She didn’t know the solution or what to do about it but felt despondent–again, overwhelmed with the demands of life.  That’s the feeling of this phase.  And knowledge is power–and we know phases are just that, phases.

We could toss in the mercury retrograde and the two eclipses this month on top of it (and personally I’m having a Lunar Return today), but then why complicate things further?  I’d like to stick to the blog post topic –the Balsamic Moon Phase.

Here’s the view from the perspective of the psychic/the sensitive.

The Balsamic phase AKA The Waning Crescent:  the Moon is 315 -360° growing into the “dark of the Moon”

This phase begins with a very deep psychic sensitivity and alternate realities make themselves known to the psychic.  Ghosts show up in this phase—like Halloween the veils are thin at this time. Communication from loved ones on the other side, spirit guides and angels are more common for everyone during this lunar phase but more so for the psychic.  Imagination and visions are at their peak.

The archetype here is one of merging with Divine Will, surrender and a willingness to go into the abyss.  More than any other time of the month, the psychic wants to withdraw from life when the Moon is in the Balsamic Phase.

We recognize the illusion of time and physical matter.  A psychic who is comfortable in this realm already can lovingly go deeply that they enter into “the universes of spirit world” and experience a liberation and freedom as well as wisdom  that… well, that helps one keep going through the next lunar cycle starting again with the New Moon.

New Moon happens again at 1° Scorpio which is also the time of the Solar Eclipse.  Again, Solar Eclipses are about something new.  Lunar Eclipses relate to some type of permanent ending.  These things don’t happen overnight and some eclipse energy affects people more dramatically than others (which depends on their natal chart points as they relate to the eclipse points) but that’s the core concept with eclipses.

Date:  New Moon Solar Eclipse October 23rd.  It’s a good time to set your intentions for the new month and the season as well.  Do so and then follow the blog posts through the phases if you’d like using the links below.

ADDENDUM:  disclaimer:  Maybe it’s because I’m in the midst of a PERSONAL LUNAR RETURN but I wanted to come back to post a bit more about the ‘feelings’ now as they relate to the earlier phases of the Moon as it grew full–a comparison and contrast.  By the way, a Lunar return is when the Moon returns to the same degree and minute as it was on the day you were born.  So, that happens monthly. I think that’s going to be my next project:  to write about the Lunar Return.  I’ve noticed, through the years, the days when I’ve felt — for lack of a better word right now– I’ve felt FUNKEY, different, strange, weird or felt something was ‘off’ and so looked at my chart to find time and again that the Moon was conjunct my birth Moon on that day.  So I’ve been meaning to investigate Lunar Returns a bit more; my understanding at this point is that they are like a New Moon, but even more personal.  That’s as far as my knowledge goes–and up until now I thought of a lunar return as a double moon of sorts just intensifying emotion.  But I plan to find out more.

Anyway, back to this personal addendum on the balsamic moon phase.  I look back to the New Moon and the Waning Crescent as I had this dilemma and desire and planted some seeds— well, okay.  At the New Moon time I was  telepathically screaming into the heavens asking what is going on, what direction should I take and what is this all about and then stating my needs and desires best I could.  Stuff started to happen–very encouraging and validating stuff.  I felt, well… validated, confirmed, 10-4 good buddy message received and all that.  I knew what was going to happen and still do–eventually.  It hasn’t happened yet but I have been given full assurances–in the physical–that it will and soon.  Apparently, not THIS lunar phase unless something changes in the next few days–in which case I will be back to post it!

But it is strange — and this is the point that I wanted to make about this lunar phase — somehow the fire has gone out.  Don’t misunderstand.  It’s not that I still don’t want to have happen what I was assured will happen–it will happen eventually and it could be at any moment is what I was told.  And the circumstances around this are very true to point–it is a concrete physical thing I’m talking about here.  And the ‘any time now’ does make perfect sense in the 3rd dimensional physical reality–so that part’s ‘all-good’ as they say.  Yet somehow the fire has gone out a bit or at least we could say there is no more open flame and the logs of the fire are just red embers, still producing warmth [as an analogy] but, again, no open flame.  The excitement is over and the reality of life remaining ‘as is’ filters back in and there’s a sadness and at the same time there’s a feeling of how it doesn’t matter much one way or another.  Intellectually it does because my mind is yelling at me — it matters! it matters! it matters a lot!  but the heart of me is detached from the cares of the world, the earth and my own earthly life.  There are more important considerations even if I can’t exactly nail those down either.  There’s a desire to go sit on a nice huge boulder  somewhere that’s warmed by the sun and let the wind blow my hair and move across my face and be completely STILL.  Either that or transport into a fluffy white cloud in the sky and look down and laugh at the cares of the word and laugh even more loudly at my own life.  I am not depressed, i am detached–detached, except from chocolate.  Chocolate helps, it really does!.