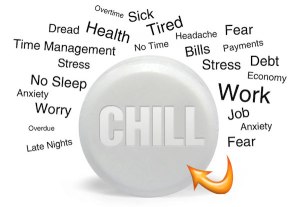 I’m Chill-axing today!  We all need a day off once in a while–to “check out” of our life in some way which is (for me anyway) a stress reducer.  We need a vacation from our self, our mind our usual patterns.  Really, that’s what it is–a pattern breaker day; that seems a much better word for it.

I’ve been overwhelmed with a few life concerns and have let my ole’ mind and emotions too much freedom to roam and today I feel that a self-imposed ‘shift’ in the pattern is what the inner-doctor ordered.  Oh, and by the way, I do think we have one.

Have had some tests, screenings that they give you free (that’s the first joke; nothing is free) so that they can find reasons to bill medicare for things that (in my opinion; based on research via google) are not necessary.  I could feel myself being sucked down that black hole of a reality… a life of “let’s go to the doctor and get more tests”.  I’ve nipped it in the bud for now with a NO which I feel is well informed and reasonable.

And then we deal with things that go bump in the night around here and disturb sleep and add it all up and i need a day off.  (You know that’s true when I don’t even want to go and swim!)

The headache that developed at the “mammogram, ultrasound and now we-want-to-stick-a few-needles-into-your-breast-but-don’t-worry-we-give-you-a-needle-to-numb-you-first’ place yesterday still lingers a bit along with the sound that shakes whats left of the psyche barely holding together at 2 am—the nightly wall banging from downstairs neighbors.  My music is on softly but i do keep it on to direct my mind to IT rather than the voices discussing know-knows-what half the night.

Toss it all up in a bowl and add my battle bruised (or maybe even broken) right small toe that i hit upon the furniture a few days ago (yes—again! I cannot be trusted to walk barefoot)…. it’s just that today I needed a break to just sit and ask myself a few questions… contemplations.

Divination helps…. i ‘d already pretty much decided “Hell NO, I won’t go” for the suggested needle biopsy of my breasts.

My YES/NO Tarot Card Spread gives me a validating NO also; assisting me to go deeper into the stress free zone.

I’ll run it past my very grounded and reasonable male general doctor who of course will tell me to go forward to cover his own you know what (think:  malpractice insurance) but hopefully my tendency to think of him as a reasonable person isn’t wrong.  Meaning, maybe he will tell me that my theories about it are, themselves, reasonable enough to delay this for a year or two in order to recheck things.

It had to be a man who invented such a procedure which includes squeezing a woman’s breast tortuously between metal and glass–give me a break.  Like a sheep led to it’s slaughter, I allowed this not once but twice and then an ultrasound and who knows what they will suggest next–well, I do, they did suggest a needle aspiration procedure.  What next? cut off my breasts?  C’mon; there’s no history of breast cancer in our family anyway.   No, I’m stopping this nonsense right now and if you are a hypochondriac reading this, i don’t want your opinion; thanks anyhow.

I’m talking to myself here or just doing nothingness today which is rare for me to begin with–but I felt I needed to take a pattern-breaker day so that i can gather the energy to redirect the whole energy field again tomorrow in the direction that I desire to go as I climb out of this medical black hole which I somehow allowed myself to be drug into.

My intuition says no, my tarot cards say no and once my doctor (a male) tells me that my refusal is reasonable (or whether he does or not), I’ve made up my mind.  I don’t worship the ground that doctors walk on —quite far from it!  I worked in the medical profession and with my eyes open so I have an education that the average person may not.

I trust my own intuition and inner feelings about things but still try to educate myself and there still seems to be a good deal of controversy over the necessity of mammograms at any age from what I’m reading and of course i do look at sources that do not have connections to the Radiology associations of America and/or the mammogram equipment providers who are bed with each other and the American Cancer Institute.  There are entire books written on this whole mammogram necessity controversy and the effectiveness.  I had to balk initially at the “big squeeze” thinking “can’t they cause a problem crushing my breast tissue like this?”  they can and needle biopsies that open up the fluid sac and drag cells out tracing the needle likely cause more problems too–they have.  Anyway.   Like I said, No.  No needles for my breast tissue, thanks.

The radiology doctor simply stated what she’s going do  (as if i had no choice) and wanted me to schedule the appointment right then.  Are you kidding?  That’s where I drew the line as if the ultrasound wasn’t invasive enough—puleeeeze!

I will say that i was totally surprised it all went that far—but then the Sun was opposing Uranus yesterday:  the astrological signature for the element of surprise, so considering the astrology I shouldn’t have been.

I’ve just realized that I have no moral to the story and no point to be made that will be helpful for others–which is what I try to do when I blog.

Maybe the point is that I think that it’s okay to take a pattern-breaker day  (or call it stress day if you’d prefer) when we feel it’s in order.  You see, i swam my laps anyway after leaving this whole mammogram, radiology business yesterday—swam with a headache.  No let’s be real, I’d have to call it a migraine (not just a wee simple headache) which intensified the longer i was in that Imaging Center place.  I though the swim would help and to some extent it did and the I had a totally empty stomach so that i thought food would help the headache after the swim… it lingered and still does but only very slightly.  I am breaking that pattern today; that’s why I’ve given myself permission to do nothing more than what I want to do and right now it’s typing this blog.

I’ve not been sleeping well lately due to my need to stream music over the small TV in my bedroom at night… it helps me focus on something besides the voices beneath me which come and go all night long escalating again at around 6 am—last night was particularly difficult with a dramatic dream involving the neighbors.  I call those kinds of dreams, venting dreams since they are energy releasing.

I am going to take my sore chest (from two mammograms in one week–just say no, and I didn’t) and yoga mat out to the balcony and stretch in the sunlight and meditate for a while.  I’ve realized that I don’t like being around radiologist or mammogram technicians much more than any other doctor/hospital vibes.  But my general doctor (had to have one for the free screening from medicare–welcome to old age) is really cool — a reasonable, kindly, about as old as myself, Irish gentleman with good humor and like i said a very reasonable attitude.  I do like and trust him and believe me haven worked with many doctors from my own medical profession background in physical therapy, I know a bit about docs.

But then again—as a product of the 60’s we learned to be suspicious of “the establishment” and to question any so-called authority which I see is something quite lacking in the subsequent generations, including my own children and distant family members.  Just sayen’.