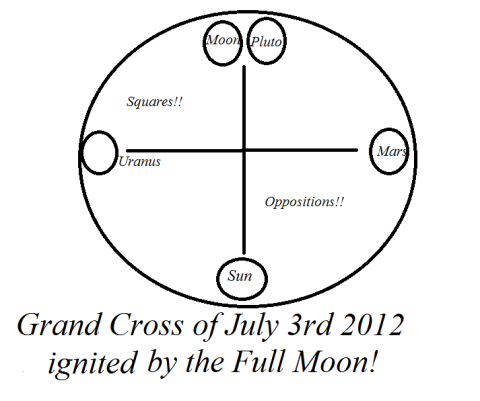 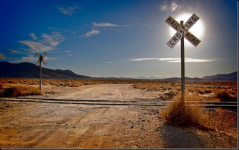 It’s not a real glamorous image but there it is – the current energy pattern, called a grand cross.  Energy opposes and energy squares all by the light of a full moon!  We’ve all got this pattern playing out in our lives right now—the heavens ARE the heavens after all! The Sun and Moon/Pluto square the Uranus/Mars opposition and we’re getting that energy from all directions having to do with courage and freedom and all of those generalized 4th of July in America themes—freedom or death!  And it may feel like that a little bit—death, I mean.  That depends, I suppose, on how attached we’ve been or how much we’ve been asleep at the wheel as the saying goes. Uranus and Pluto are squaring – there’s a battle within the soul and freedom and transformation are the issues at large.

Keeping the eyes open and watching for those flashes of clarity is what I keep getting… sometimes it takes courage to wait it out when you want to grab the bull by the horns if you know what I mean.  I’m not going to bore you with doing an astrology dissection but rather ask for guidance for all of us.  If you are facing some intense issues right now, or if the full Moon triggering these intense planets has you feeling a bit like you are coming apart, you need some guidance and for that we can ask for some input from a divination tool, the I-ching.

Yeah, I know astrology is a divination tool too and  we already know there are forces that are transforming (Pluto), emotional (Moon), liberating/surprising (Uranus) and reactive, passionate and aggressive (Mars) and they are all affecting our very essence (Sun) and the core of our purpose (Sun).  We’ve got the forces of those planets and luminaries in our literal corners to draw from and use.  Or we can let them do their work to transform us and our lives through experiences and challenges.

Yet, what is the best way to deal with the energy at this time?  Let’s toss the coins and see what the I-ching oracle says.  We have Kua 40, called DELIVERANCE.

Before a storm breaks, the accumulation of energy and tension can build to a point where if feels nearly unbearable then there is a sudden release of pent up energy.

The I-ching is clearly addressing the current Grand Cross energy and the oracle further advices that awareness and being grounded are especially needed right now for the release of energy, when it does release, could be very un-grounding.

It is vital to identify and clear away any destructive thoughts or actions that may create a heavy atmosphere—otherwise a storm of some type will have to come to clear it away.

Also, the oracle says that the current energy can enable you to see your life with greater equanimity, calmness and composure.  There is a window of opportunity now to move quickly and decisively into a new order of things, and this is best accomplished with heartfelt gratitude for all the lessons learned.

My sister just said something that struck me in an interesting way as it applies to all this–she said that something that was oppositional energy in her life just got “squared away”.  “We got that squared away”, she said referring to some opposition that she had with someone.  Since she said that by phone (as I took her call while writing this blog), I found it very interesting–synchronistic.

Maybe Mars and Uranus can square away any issues of an oppositional nature that we have with Pluto/Moon and Sun and also the other way around!

Here’s hoping that anything in your life that needs to get squared away now is easily accomplished–that’s one way of looking at this Grand Cross energy.  Perhaps the squares help the oppositional energies merge instead of oppose!  And if you celebrate ‘the 4th’ as we call it in America, enjoy the fireworks and we hope it’s only the good and pretty kind!