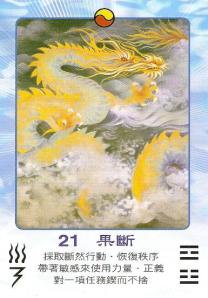 Take decisive action!  Restore order! Apply force with sensitivity! It’s about a tenacious devotion to a task!  Yeah, that’s the message for today and here’s how it is applying to my life, my issue, my apparent delusion of samsara. May the core theme of guidance help you in some way too!  I’m at the end of the rope and am hanging out waiting for them to arrive so I turned to the I-Ching.   Waiting for who?  Keep reading… it’s about some company coming and other company leaving–quite the drama! Having a free moment, I turned to the ancient divination system for guidance or support—what do YOU have to say about this I thought.

The hexagram of Biting Through points to a time when it is imperative to take swift and decisive action to redefine and reform your approach. The harmonious unfolding of your life has become blocked and the responsibility is yours to correct the imbalance. Once it becomes obvious that something isn’t right, getting to the crux of the matter promptly should be your top priority.

Push through obstacles; vigorous measures must be taken–the time for deliberation is over, but do so in the right way.

Today’s DIVINATION MESSAGE:  Today, confront all apparent problems that arise and putting aside all anxiety, do what needs to be done–confront life’s issues with emotional detachment and honesty.  Emotion will cloud the ability to see clearly.  Stick with the facts.  Self-assurance and determination are keys to implement changes as thoroughly and painlessly as possible.

Again, this comes from I-Ching Kua 21 which is called “Biting Through” and has to do with punishment that is certain and swift.  Can you believe that I find this message comforting?

Maybe you can understand if I tell you this much of the famous night before Christmas story… “…not a creature was stirring, not even a….”….EEEeeeeeeeek, a mouse!

I’ve tried—truly I have.  The strict Buddhist would find a problem with it and at first I tried to ignore the whole thing—i.e., no, I didn’t just hear something in the attic.  Oh, well, maybe one small mouse just trying to be out of the cold and get warm.  I have compassion, truly I do!

If you only knew how many times I would gently take a wayward spider or cricket or once even a wasp out the door chanting OM MANI PADME HUM.  Be on your way tiny Buddha, I’d say while helping them back outside.

Yes, the Buddhist won’t even kill ants.  And you know the story of the worms from the movie starring Brad Pitt, Seven Years in Tibet.  The monks didn’t want to dig up the earth to make a building upon it because they were killing earthworms in the process.

The landlord and I have used certain poison that I think this growing population of mice are immune to.  And maybe you will think this is far-reaching, but maybe because of my own buddhist type resistance to having them die well and quickly– they aren’t.

I have asked they all become reborn into a life where they do not have to seek shelter from the cold and risk eradication—perhaps they could be reborn as little kittens to a nice welcoming home.  If they were good, devoted mice or whatever, then when they leave samsara (here), they will take on a better (next) life.

Anyway, I am convincing myself that they will have that.  I saw one little mouse on the cellar steps so devoted last night to dealing with the details of the poison food that I had put down… they picked up every single morsel.  But then THAT gave me the willies too!!

Oh I will spare you further details—I trust you have heard enough already.  I do like the ‘Biting Through’ guidance of Kua 21 however,  for this problem that is causing me a good deal of emotional drama.  The bottom line is to take swift action and get the emotions out of it.  Got it!

At 3 pm, the landlord and Terminex Exterminating Company will be here and I am assured that it will be dealt with just that way.  The guy will come back every so many days and/or when I call him as needed in contract with the landlord.  I am blessed to have a landlord who will take the swift necessary action.

In Wilhelm’s book on the I CHING it is written, “Biting through has success.  It is favorable to let justice be administered.”  I’ll take that as the good omen or indication that the right thing is being done. In Wu Wei’s book, he calls this kua “Corrective Punishment”.

AND, as a BOTTOM LINE, even though I won’t be here (holiday with my daughters) on Christmas Eve, I truly do hope nothing  here is stirring, not even a mouse!  May they go to the light with ease and be reborn in a better life! — ‘nuff said.