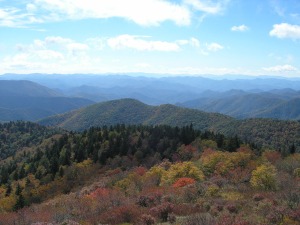 Living a life of solitude, alone on the mountain (more or less – it’s a small town filled mostly with fundamentalist christians and republicans, dotted with NASCAR fans) has its pluses and minuses. One aspect of it all has to do with sometimes feeling that I’m from outer space observing life forms on planet earth.

Don’t get me wrong, I can speak the language and relate to the locals—when I have to. But for the most part, I stay to myself applying the wisdom of the dictum, “When in Rome, do as the Romans do”—or at least try to blend in.

The same behavior style that leads to approval or success in one subculture spells rejection in another.

To say that I don’t “relate” on the same consciousness level to folks here in the NC Appalachians would be an understatement and yeah I’ve been asking myself the same question for years—what am I doing here? It has to do with the mountains and the forest and the wildlife, fawn and foliage and all that. 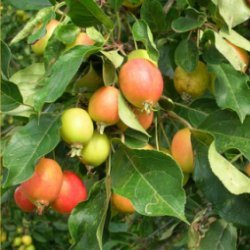 Speaking of wildlife, there are crab apple trees along the side of the property near the driveway of the home that I rent and when I came home just after nightfall, my headlights caught the sight of about 20 deer hanging out by the crab apple trees. Strange as it may sound, I live for those types of moments. They startled and I apologized, parked the car and walked softly to observe them, speaking to them softly as they allowed my presence near to them.

I also observed two other life forms earlier where I stopped for a takeout order of dinner—a self-reward for working in the yard all day! While my dinner was being prepared by the restaurant, I walked to a nearby drugstore. Leaving the establishment to do so, I see a life form that sent me psychic signals through vibrations, behaviors and looks (sweet eyes) that she’s hungry. Yet she seems quite polite about it, keeping distance while beseeching in her mannerisms. I vow to share my take out dinner with her, saying hello as I pass by. That life form was intelligent and aware of humans and certainly knew where food was located—she looked underfed but not sickly. For a second or two, I imagined bring her home with me but thought better of interfering with her will… such sweet eyes; but like me, she kept to herself for the most part.

The time came to return to the restaurant to pick up my order and while waiting for it at the counter, I looked beseechingly around as if I were the lonely, hungry life form herself seeking some sort of recognition and some food. I wanted to mention to one of the waiters or kitchen workers that a hungry life form was just outside the door should there be any scraps for the sweet eyed one. I felt my energy going back behind the counter and around the busy waitresses as if to bring the telepathic message to whatever consciousness could be receptive to it.

I couldn’t get anyone’s attention and my take out order was handed to me and the server walked away quickly before I could mention the hunger just outside of the door. No matter, I thought, I will share my sack of food.

Just before me as I was heading out the door, another life form steps in front of me rudely and opens the door to exit without holding it. This was a male energy-being who was nearly as wide across as he was tall and appeared oblivious to any other life forms outside of his own.

I quickly understood that before me walking on two legs was a consciousness far less advanced than the hungry life force just outside. The ego in this one was running the show and the higher mind did not appear to be activated at all. The four-legged one, seeing opportunity walked carefully and sheepishly toward the two-legged form who appeared extremely well fed himself. His response was to stomp his feet in the direction of the sweet eyed four-legged form, making a vile and disgusted grunting noise while raising his arm in contempt which was coordinated with the stomping of his feet and in a very deep,  mean-sounding voice said, “Get out of here you!”

She did; she ran and disappeared between the parked cars. I was willing to share my meal with her but the growling lower life form that stood between us frightened her away. I waited and called out, but she was gone.

I remembered how it is with small minds not fully developed and this brought me out of my temporary resentment and into a mood of patient acceptance of how it is on planet Earth. In many humans, whatever intellect functions does so at a level of primal animal drives and self-serving goals. Additionally, various life forms vibrate at countless levels of consciousness expansion, some functioning at intense levels of anger, frustration, guilt, despair, fear, pride, shame, hate, apathy and all attitudes under the Sun. This accounts for a high percentage of life forms from the human kingdom responding to life experiences and other life forms in primitive and survival-oriented ways. Surrender and acceptance of these facts are the only ways to deal with one’s own emotions when one see’s 2-legged’s treating 4-legged’s in unconscious ways. 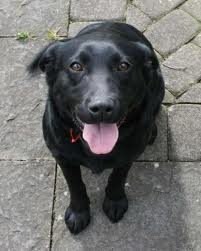 Driving away from the restaurant, I see one of the workers come out of the door with a small box. “Come on, do you want this?” were the words and out from nowhere it seemed here comes the sweet eyed four-legged life form wagging her tail. Did someone hear my telepathic message earlier when I was in the restaurant as I beseeched on behalf of the black retriever? It’s probably more like they feed her all of the time in that way.

It doesn’t matter really, but I was very happy that the kind, compassionate two-legged female came out with a box of food for the sweet, hungry four-legged life form! I spoke to her as I pulled away, “I’m so glad you did that for her” I said. She smiled and waved and I returned her gestures and despite the ‘angry-voiced 2 legged male’  who waved his fist, stopped his feet and yelled earlier, the sweet eyed dog gratefully ate.

Afterwards, I found myself thinking about the various consciousness levels of the various kingdoms on Earth.  In this example of forms from the animal and the human kingdoms, which of the two will evolve to a higher life form at the end of this current life experience?  The man or the dog?  Will the man somehow in some future scenario get to know how the dog felt?  One wonders… 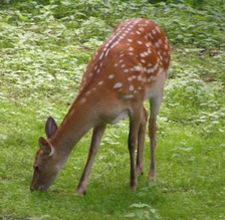 And when I got home, the apple-eating deer were having their meal too.

I put mine on the kitchen counter and went outside to observe them, all the while telling them how welcome they were, how I love them and to enjoy the apples!

in the North Carolina Appalachian Mountains….

ADDENDUM — there are beautiful, kind, generous people in all areas of the world/the country, including the Appalachian Mountains of North Carolina.

I have met some very kind, gentle people here.